Today we’re chatting with Michael A. Stackpole, a versatile writer who happens to be local, so we run into each other from time to time. 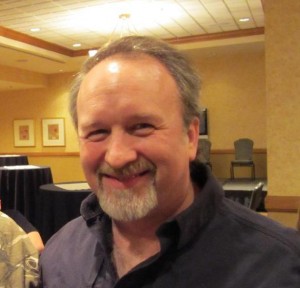 For somebody unfamiliar with the writings of Michael A. Stackpole, how would you describe your fiction, and which story do you think makes the best introduction to your work?

My work is really all over the place: fantasy, military SF, SF, tie-in books; and I do single novels, series and shorter to medium fiction. Heck, I’ve even written color copy for playing cards. In general, my work tends to be strong in terms of characterization, plots tend to have twists and I really like to have something completely unique. In terms of starting place: Military SF/Tie-in work would be Rogue Squadron and for fantasy would be Talion: Revenant or The Dark Glory War.

You began your career in game design. How did you end up in that line of work, and how did you make the transition to writing prose fiction?

I started working on roleplaying game scenario design when I was in college. After I graduated from college I had a choice: become a high school history teacher in the high school I’d graduated from or enjoy the adoration of dozens by becoming a game designer. I made the latter choice, moved to Arizona to work for Flying Buffalo, Inc., and have been here ever since.

Roleplaying game design is a lot of writing. RPGs were to the 80s what the pulps were to the 30s for developing writers. Still are, really. So I would work a day job developing fictional worlds and characters, then go home and write stories. I really got to hone my skills doing all that and by the mid 80s had written my first novel, Talion: Revenant.

What was your experience of writing Star Wars universe novels like, and do you still get much attention from the fans of those books during public appearances?

Writing for Star Wars was a lot of fun. It’s a universe I love. It was an honor and privilege to be able to create adventures there. Lucasfilm was very encouraging and tolerant of writers fumbling around in their playground. And even though the last Star Wars book of mine came out over a decade ago, I still get a lot of attention for the books. Everyone remembers the X-wing books and especially I, Jedi, very fondly.

What was your reaction to the first time one of your books hit the New York Times bestseller list?

It was all kind of surreal. I don’t think it hit me until I was in a grocery store, buying some chips, and watched the bag roll past the point of purchase display with my book on it. I thought, “Damn, that’s me.” Being able to write professional is a dream anyway, and that just takes it one level deeper.

From your own stories (as opposed to work-for-hire), in which fictional universe do you have the most fun writing?

That would literally depend upon my mood. I have some darker universes (Trick Molloy, In Hero Years… I’m Dead) that are great for when I’m feeling very cynical. That’s usually after avoiding morons in SUVs with cell phones glued to their ears, as they careen through a parking lot. Other universes, like Purgatory Station or the Crown Colonies are more fun for those “Gosh wow” discovery moods. I’m generally an optimistic person, so my negativity comes through as sarcasm, which is fun to write. But having a balance is important, I think, because it gives readers more opportunities to find work that fits their moods.

You have been ahead of the curve on digital and independent publishing for a number of years now. What factor made you decide this path was for real?

First off, I’m a gadget-slut. I love picking up new tech and playing with it. I had an Apple Newton and found I could put books on it. In the early 1990s I was using the GEnie network to send manuscripts off to publishers. I just thought all of that was so very cool. So, being aware that the tech was there and watching it develop meant I was always aware that ship would someday dock. That got coupled with another reality. There’s a saying among motorcycle riders: Either you’ve gone down, or you’re going down. It’s the same way with authors and publishers: Either you’ve been dropped by a publisher, or you will be dropped by a publisher. It happens to all of us. Now, because there are fewer and fewer large publishers, and because the technology means that any website can be a retail store, getting my work formatted to sell direct to readers was pretty much of a no-brainer. I mean, would a farmer sit around not able to figure out what to do with a crop of apples if the local store decided they weren’t going to buy from him? Of course not.

As the tech has gotten better, setting up your own road-side stand (to continue the analogy) only makes sense. The writer gets more money for each transaction and readers seem to enjoy buying direct to support authors. It’s a win-win.

If publishers are smart, in ten years they’ll be faery-godmothers who have let the internet and digital publication choose the folks they want to bring to the masses. It will be the Fifty Shades of Wool school of them backing only sure-thing bets. They won’t chance growing authors since they don’t need to. The net will do that for them.

If they are super-smart, in ten years they’ll have small, boutique bookstores in every mall (think back to the old B.Dalton Bookseller shops) that will have print-on-demand machines in the back. You order online and pick up the book when you get there. Likewise they’ll be able to sell you a book to be uploaded to your ebook reader or a thumbdrive for ease of transport. The preprinted books in the front of the store will only be the latest and hottest sellers—that portion of the store will best resemble the small stores in airports. But if you want the book, they’ll have it printed for you inside fifteen minutes, so any book you could ever desire would be available almost instantly.

Smaller regional publishers will still do just fine, provided they build up a presence on the net so when they produce short print-run books, they’ll have a ready market for them.

Authors will be doing two kinds of work. Mostly they’ll be writing stories on their own, collecting them, publishing them, and waiting for a publisher to notice them. And they’ll do just fine if they don’t. Writers will also take on traditional contract jobs writing tie-in books and the like. They’ll do fine on those as well. Kickstarter, and all of its competitors, will really help writers thrive.

Now, if publishers and authors are NOT smart, it all goes to hell in a handbasket and entertainment will be reduced to renting reruns from iTunes.

What are the projects you have coming up in 2013 that get you the most excited?

I have a World of Warcraft novel coming out in July. It was a blast to write and I really hope they come back to me for more stories. I’ve just signed a contract to write a Pathfinder novel. I’m also writing a lot of shorter fiction which has been offered as stretch goals in a number of Kickstarter projects. Lastly, I’ve got several other novels under contract, so I’m waiting to see how my schedule sorts out so I can slot them in with deadlines.