Apparently. The marketing superstars at Merck believe that using the logo for their blood sugar drug Junuvia as a Christ-like halo will sell more pills. But really, is this such a good idea? Is blasphemy now considered a good marketing practice? I mean, is it really a good idea to royally piss off all Christians? They aren’t an insignificant market segment. I mean, I’m not a particularly religious person, and yet I find this tremendously offensive. 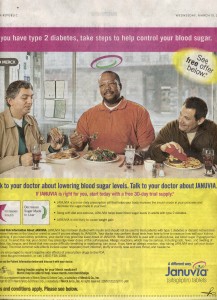 Compare the image to Davinci’s “The Last Supper.” While it’s not a a carbon copy, it’s clear that’s the image we are expected to recall. 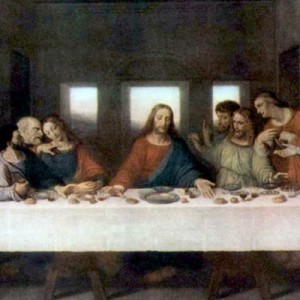 Without the halo, the connection isn’t made, despite the fact there is no halo in Davinci’s painting.  I try to visualize the meeting where this decision was approved.

“Why don’t we make an ad that resembles Davinci’s “The Last Supper” and use the logo as a halo over some actor’s head.  I mean, our drug is the Holy Grail of drugs.”

“Yeah, and we’ll make it a black guy so we don’t look racist.”

“And we’ll put it at a Jewish deli so we can claim it’s not intended to look like ‘The Last Supper.'”

Get a clue, Merck.  it isn’t funny to bash Christians any more than it’s funny to bash Jews or Muslims.  It’s also a very poor business decision.

One Response to Blasphemy Sells