Those who follow along know that I lost a bunch of fish due to toxins related to several heaters I purchased and used. Among the fish impacted was my Australian Desert Goby (Chlamydogobius eremius) colony. This is one resilient fish, but I still lost half my colony, including my only adult male.

Earlier this week, I discovered a young male guarding eggs. It’s exciting because this is the first clutch of eggs since the toxin exposure, and I wasn’t even sure if reproduction was impacted. I still don’t know if there will be any genetic defects.

This male is so young it isn’t even fully colored yet. Yesterday I noticed that the eggs had eyed-up, meaning I could see black dots that are the eyes of the unhatched fry. Today I moved the eggs into a separate tank to hatch them. While the male guards the eggs with much dedication, he will eat the fry as soon as they hatch. Since this fish has a lifespan of not much more than a year, it is imperative to breed the fish one wants to keep them longer. Clearly, the toxin incident had put the entire colony at risk of dying out.

I decided to document the process I use, which has been successful for me in the past. The only new addition to the fry tank is a heater. I have not done this in the winter and we don’t heat the house. Since this is a fish that prefers warm water, the heater is necessary this time of year. (You can click the photos for a much larger image.) 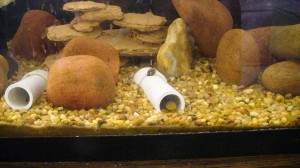 Above is a picture of the brackish (1.005 Specific Gravity) tank where the main population of my desert gobies live. The white PVC pipes capped on one end are breeding caves. The male picks a cave then attempts to invite a female inside to lay eggs. You can see his head at the end of the cave on the right.

Once the eggs have been attached to the side of the cave, the male will evict the female and guards the eggs with great dedication. He will come out, but he will not stray very far from his cave. 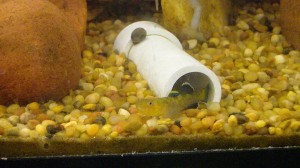 Breeding is not difficult but the setup has to be a certain way. here is my setup before moving the cave into the tank. 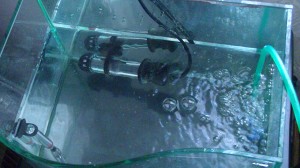 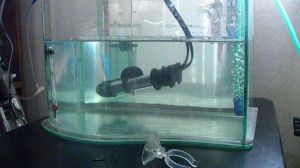 Yeah, this is a goofy-looking wave-front roughly 2-gallon tank I got cheap when a fish store went out of business. In summer I use a plastic shoe box, in winter I need to use a heater so I have to use glass. This is my only vacant glass tank at the moment. The water in this tank is also 1.005 SG brackish.

This is a female desert goby, in case you want to know how they look. This individual is almost certainly too young to be the mother.

Once the hatching tank is ready, I transfer the eggs from the main tank into it, keeping the eggs submerged the entire time. 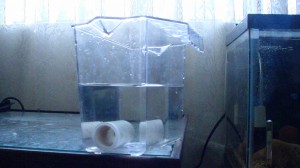 While in the Dip’n’Pour, I took the opportunity to get a good photo of the eggs so you can see the eyes. 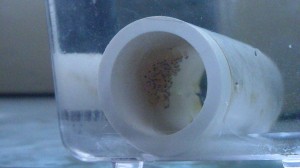 Note that I have removed the end cap from the cave. Most of the male’s energy is spent trying to keep water moving over the eggs. This is to prevent stagnation that can cause fungus to grow, killing the eggs. I need a replacement for the male’s efforts. That comes in the form of an airstone. The airstone is placed next to the breeding cave so that water is moving around the eggs, but the air bubbles do not enter the cave. The cave is attached to the wall of the tank vertically to allow water to flow and so the fry drop to the bottom after they hatch. 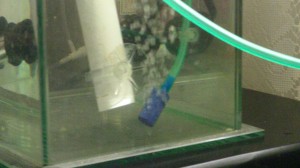 This particular male was very defensive of the eggs. When I stuck my hand into the tank, he went back to the end of his cave to guard the eggs as best he could against a threat 1000 times his size. I couldn’t get him out until I removed the end cap. He was hiding back there, so he simply fell out the back when I removed it.

Taking away the cave leaves behind an extremely pissed-off male goby, who will spend the next several minutes looking for it with quick desperate movement. 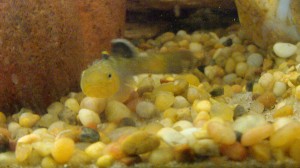 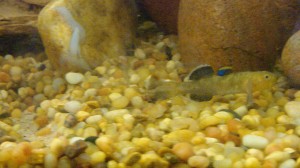 Looking for his eggs

I always feel bad removing the cave with his eggs. It’s like kidnapping his babies. Then, I remember that if I leave the eggs with dad, he will eat his children when they hatch. That makes me feel a bit better, and the goby gets over it quickly. In no time, he starts trying to attract a female into the other cave.

Now I wait, checking the eggs occasionally to see if they have hatched. Realistically, I probably have a couple more days before I have fry. When they do, I will post an update and give the next set of steps I follow.