This week, I interview reclusive British author Ian Creasey. I’ve known Ian through the Codex Writer Group for a number of years. We have critiqued each others’ stories a number of times, and I’ve always been impressed with his measured and calculated approach. 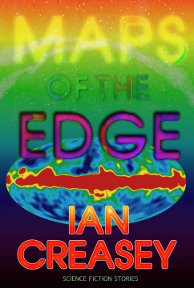 For somebody unfamiliar with the work of Ian Creasey, how would you describe your fiction and which story do you think is the best introduction to your work?

That’s a tough question because I don’t like to pigeonhole myself, and I’ve written different types of stuff: comedy, fantasy, even a few mainstream and horror pieces. But it’s fair to say that I’ve had the most success with SF stories that are character-based and set on Earth in the near future (by which I mean the next century or so). Generally I start with a premise, and see how it affects people. So, for example, in my story “The Prize Beyond Gold”, I began with the idea that athletics records must eventually approach the limits of the physically possible, and I asked myself what it would be like to be a sprinter in that situation.

As for which story is the best introduction to my work, I faced that question when I was putting together my collection Maps of the Edge, and I had to choose the opening story. It’s very difficult for writers to judge their own fiction. I’ve written stories that I love, but I just can’t sell. Conversely, I’ve written stories that I thought were merely average, but ended up selling to good markets and then getting reprinted. So my own opinion of my work seems to mean very little! I eventually decided to start with the story that had received the most external validation. “Erosion” has been reprinted in three Year’s Best anthologies, so I must assume that it’s my best story. It’s the tale of a man with a newly augmented body, and how he spends his last few days on Earth.

You are a mathematician by trade. Do you find it difficult to transition from the left-brain world of mathematics into the right-brained world of prose fiction?

I’m not actually a mathematician. I did a degree in mathematics, but I work in the financial services industry. My job is fairly technical, but it’s not mathematics in the academic sense of proving new theorems and whatnot.

I quite like having an analytical job that’s completely different to writing fiction, because it means that I get the chance to use my brain in different ways. I’m not burned out on prose in the day job, so I’m fresh when I come to it in the evening.

How has your background in mathematics impacted your writing?

Hardly at all. I don’t write “hard SF”, so I’ve never needed to be able to calculate orbits or delve deeply into abstruse scientific issues. The only story I’ve ever written that uses my mathematical background was a comedy called “Reality 2.0”, in which Microsoft releases an upgrade to mathematics. Here’s an excerpt to give you the flavour:

The product’s slogan is “Now you can divide by zero!” It is now also possible to square the circle, trisect an angle, and prove the Goldbach conjecture that each even number is the sum of two primes. There is a new quantity ‘infinity plus one’, and for convenience the value of pi has been adjusted to exactly 3.14.

But although the story starts with this idea of upgrading mathematics, it mainly focuses on the consequences. That’s always my main interest when writing fiction. Science is important, yet what really matters is how it affects people. That’s where the story lies

Both mathematical people and fiction writers seem to have a talent for music, and you are no exception. What instruments and what type of music do you enjoy playing, and how much of your time is spent on music?

I mainly play guitar, but I can also tinkle around a little bit on keyboard and harmonica. However, I don’t play very much music nowadays. When I started to achieve some success in writing, it became harder to justify spending time on music. I found myself thinking, “This evening I can either work on a story that has a reasonable chance of being read by 20,000 people; or I can work on some music that isn’t going to be heard by anyone ever.” The more hobbies you have, the less time is available for each, and the less you’ll achieve in each.

You have pretty much established yourself as a short fiction writer, having appeared in Asimov’s Science Fiction at least ten times as well as other professional markets. What is it about short fiction that attracts you, and do you have any intention of trying your hand at longer works?

As a reader, I always enjoyed short fiction. When I was growing up, the major SF writers — Asimov, Ballard, Clarke, Dick, Sheckley, etc. — all had numerous volumes of stories sitting on bookshelves alongside their novels. In those days, short stories were an integral part of the genre. I think it’s a great shame that this is no longer the case, and nowadays there’s so much focus on novels.

As a writer, I like short fiction because every story feels like a manageable project that you can realistically see the end of. Also, you have room to experiment and try different things. I mentioned before that I’ve written stories which are SF, fantasy, horror, mainstream, comedy, and various hybrids. I’d never have been able to write novels of all those types.

As for longer works — intentions are easy; execution is hard. I’m not currently working on a novel. It might happen one day, but don’t hold your breath!

With your track record, does it bother you at all that some other writers with a similar bibliography seem to get more attention?

No, because if other writers are getting more attention, then it’s probably for a reason. Either they’ve written better stories than I have, in which case good luck to them. Or they’ve put more effort into self-promotion than I have, in which case they’re reaping the rewards of the effort they’ve put in. I don’t have a blog, and I’m not on any of the social networks, so I certainly can’t complain about having a low profile. That’s a consequence of the decisions I’ve made.

Your new book, Maps of the Edge, is a collection of seventeen short stories. What prompted you to publish a collection and what criteria did you use for story selection?

I published the collection simply because I saw that so many other people were publishing their backlist — I thought that surely it couldn’t be very difficult if so many people were doing it. As it turned out, the process was a little more involved than I’d anticipated, but I suppose that happens when you do anything for the first time.

The finished book was the outcome of several criteria. Firstly, I wanted to produce a proper full-length book in a print edition as well as an electronic edition. So my target length was around 90,000 to 100,000 words.

When I looked at my bibliography, I saw that my published stories added up to 232,000 words. I needed a simple way to carve that down to a more manageable selection, so I decided to start with an SF collection and follow it up with a Fantasy collection at a later date.

I chose to split the SF collection roughly half-and-half between stories from Asimov’s and stories published elsewhere. To the extent that I have any reputation, it rests mainly on my Asimov’s stories, so I had to include several of those. But I didn’t want any reader of Asimov’s to think they didn’t need to buy my collection because they’d already read most of the stories — so I included enough other pieces to give sufficient value to the collection for anyone who’d already read my work in Asimov’s.

In summary, it was a pragmatic process. Writing is art; publishing is business.

Your website has a fairly long list of audio fiction links, and some of the stories you read yourself. (You have a wonderful voice for storytelling, by the way.) Do you enjoy reading your fiction for an audience and how important do you feel producing works in audio form is to your complete portfolio?

The audio page is actually an accident. It was never planned; it’s just grown over the years.

It all began in early 2005, before I even had a website. As you know, James Maxey is a member of Codex, our online writing group. He was talking about compiling a podcast of some kind — remember, podcasting was very new back then. He asked if any Codexians were interesting in recording their stories and sending them to him. I thought it was an intriguing idea, and it would be quite easy because I already had the necessary equipment from my music days. So I recorded a few of my pieces for him. It was the impulse of a moment; it didn’t take very long to do.

Later that year, after I’d made my first sale to Asimov’s, I decided that I should set up my own website. Then, of course, I was faced with the need to find some content for it. Since I already had the audio files I’d recorded for James, I decided to put those up.

Subsequent years saw the growth of podcasting as venues such as Escape Pod and Pseudopod arose. These markets paid for stories, and they would record stories that you’d already previously published elsewhere. I diligently submitted all my backlist to the various audio markets, and gradually a few stories got accepted and podcasted. As that happened, I added the relevant links to my website, and that’s how the audio page has grown.

From my perspective the audio page is an easy way to make content available. Also, I’ve noticed that audio fiction tends to generate more feedback from readers. A story podcast on Escape Pod will typically attract a few emails, whereas the same story previously published in Asimov’s might evoke no feedback at all. I’m not sure what causes the difference, but perhaps it’s that hearing a story read out loud feels like a more intimate connection and hence generates more of a reaction.

I’m looking forward to publishing my book of fantasy stories, which will be the follow-up to my SF collection Maps of the Edge. Right now I’m taking a break from the publication process because I need to make sure I don’t spend so much time on this stuff that I neglect the writing. But I will get back to it, and I hope to publish the fantasy collection some time next year.