I met David Lee Summers at CopperCon a number of years ago. It was about three months after he accepted a story of mine for Tales of the Talisman. David is a writer, an editor, and a professional astronomer. 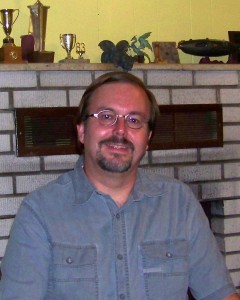 For somebody unfamiliar with the work of David Lee Summers, how would you describe your fiction and which story do you think is the best introduction to your work?

My work covers the spectrum of speculative fiction from science fiction to fantasy to horror. I love history and folktales. Both inform my writing quite a bit. Not surprisingly, perhaps, I’ve taken a real interest in steampunk lately. That said, my science fiction story “Jump Point Blockade” in the anthology SPACE BATTLES was inspired by the story of the pirate Jean Lafitte’s involvement in the Battle of New Orleans. My story “The Vrykolakas and the Cobbler’s Wife” coming out this month in CEMETERY DANCE was inspired by a Greek vampire folktale and its similarities to the story of “The Elves and the Shoemaker.” Both of those stories would make great introductions to my work. The former is more playful and fun. The latter is a more serious, character-oriented piece.

“The Vrykolakas and the Cobbler’s Wife” is in issue 66 of CEMETERY DANCE, available at: http://www.cemeterydance.com/page/CDP/PROD/_cd066

You are a professional astronomer working for Kitt Peak Observatory. How has your science background influenced the stories you write?

Astronomers from around the world write proposals and are granted blocks of time at the Kitt Peak telescopes based on merit. My job is to help those visiting astronomers make the most efficient use of the time they’ve been granted and get high quality data. Because of that, I see a lot of cutting edge research. I’ve helped with such projects as searching for extrasolar planets, studying supernovae, and understanding so-called dark energy. Because of this, I have a pretty good sense of how astronomers view the universe, which can give me some good detail to throw in my science fiction stories. I’ve even used this background to give some reality to my horror fiction.

There’s also a less obvious way science has influenced my fiction. Working in the particular job I do, describing things concisely and completely is critical. I think being an astronomer has helped me develop my eye for detail and given me an ability to use detail in a way that doesn’t overwhelm a story.

Finally, because I get to meet so many astronomers from around the world, I think it’s helped to drive my interest in writing stories that explore culture and looking at those parts of humanity that make us more alike than different.

What is your favorite part of being an astronomer?

Carl Sagan once said, “We are a way for the cosmos to know itself.” My favorite part of being an astronomer is being a part of the process of self-discovery. I don’t actually do my own research as part of my job, but I help a lot of other astronomers do research. When I see a graduate student smile at the end of a successful observing run because they have the data needed to complete a thesis, I know I have been part of the cosmos learning about itself.

You edit the fiction magazine Tales of the Talisman. How would you describe the health of today’s short speculative fiction market and the quality of material you see landing on your desk?

The good news is that the popularity of ebooks and the ease of print on demand have allowed a lot of small presses to come along and publish anthologies. This has created a lot of opportunities for writers. The bad news is that there is a lot of competition for readers’ attention, so not a lot of these small press markets can afford to pay much. I find I have more outlets for my short stories now than when I started writing and more of the ones I submit to pay. That all speaks to a healthy market. Unfortunately the pay isn’t much and I would be hard pressed to make a living as a short story writer.

I’ve tended to see an increase in both the quality and quantity of submissions to Tales of the Talisman. I think much of that is due to the fact that we’ve been around in one form or another for seventeen years. A lot of good writers know who we are and like the way we present their stories, so they send me good work.

You have written both short and long fiction. Do you consider yourself more of a short story writer, or a novelist?

I guess I see myself as both in roughly equal measure. At this point, I’ve published approximately sixty stories, forty poems, and six novels. A seventh novel is due for release soon and an eighth is under contract. I like both forms, but they each present different challenges. I like novels for their ability to explore characters and situations in depth. I like short stories for their ability to present an interesting idea concisely.

I like the ease of communicating with small press publishers. I also like the fact that they aren’t quick to pull books from print. They will work with you to get your books to the right audience. My impression is that major publishers want your book to succeed quickly, which is fair, but they generally aren’t interested in adjusting marketing strategy if the first approach didn’t work.

I also like the fact that the small publishers have generally given me a quick response to my submissions — usually just a few weeks to a couple months. Submitting to a major publisher over the transom, it can take a year or more to hear a response.

As a publisher, where in the process do you believe electronic publishing is right now? Is it on the rise, or is it leveling off?

I think electronic publishing is still on the rise. In essence, it’s already taken over the role that used to be filled by the mass market paperback. It seems like the biggest issue that’s still being sorted out is ebook pricing. Smaller publishers seem to be pricing their books inexpensively, more like mass market paperbacks used to be priced. Bigger publishers tend to price their new ebook releases to match their hardcover and trade paperback releases. I can’t imagine that most consumers find new-release ebooks from major publishers the best value for their money.

Generally speaking, I see much stronger sales of my ebooks than my paperback books. I’ve adjusted the workflow on Tales of the Talisman so I can create both ebook and paper editions of the magazine. The first ebook is complete and should be available from places like Fictionwise and Amazon soon.

I was reading a lot of the space adventure of Robert A. Heinlein and A. Bertram Chandler when I was forming my style. New Mexico writers John Nichols and Tony Hillerman were also very influential early on. I think what appealed to me about these four men was their straightforward narrative style combined with their appreciation of history and culture. I can’t ignore the wide-eyed wonder of Jules Verne and Edgar Rice Burroughs who brought me to speculative fiction and I’ve recently re-read.

Right now I’m just getting the ball rolling on WOLF POSSE. It’s a sequel to my wild west steampunk adventure OWL DANCE. Set in an alternate 1877, the Russians have invaded the United States and a band of outlaws have stolen the machine that might help America win the war. Several of the supporting characters from the first novel are taking more of a lead in the sequel and I’m really excited about the directions they’re going in this story.