Today, I have the pleasure of sharing with you an interview with Jay Lake. This is my first interview with somebody I have not either met in person or interacted with regularly online, although we do have a lot of common friends. Jay was kind enough to be just as open here as he has been on his blog, which I greatly appreciate and hope you enjoy reading. 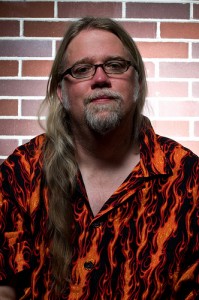 For somebody unfamiliar with the work of Jay Lake, how would you describe your fiction and which story or novel do you think is the best introduction to your work?

My fiction is at its best eclectic. I’ve written short fiction in nearly every speculative fiction voice and style you can name, from riffing on Cordwainer Smith to Robert E. Howard, from space opera to high fantasy. In novels, eight of my ten published works are fantasy of one form or another (depending on how you view steampunk), while only two are unequivocably science fiction. So it sort of depends on what you want. MAINSPRING is the first novel in my steampunk trilogy. GREEN is the first novel in my assassin fantasy trilogy. DEATH OF A STARSHIP lays open my science fictional worldview. TRIAL OF FLOWERS is just freaking weird. And in short fiction… perhaps “The Sky That Wraps the World Round, Past the Blue and into the Black”, a short piece of medium future SF; or this year’s Nebula and Hugo nominee, “The Stars Do Not Lie”, a steampunk lost colony religious novels.

You have been an inspiration to a lot of people over the years, first with your persistence at writing and rejection for years and years before you broke in and became successful. Later, you became an inspiration in the way you handle adversity and major health issues. Would you describe what that’s like from your perspective?

Kind of weird, frankly. I’m just a guy, doing what he does. Which is of course true of all of us. These days I’m probably in some ways better known for my cancer blogging than for my fiction. I find this mildly frustrating. I never wanted to be the cancer guy. But it’s a story to tell, and it’s an important one. In any case, I can’t afford to think of myself as inspirational. That would mess me up. So I keep doing what I do.

Let’s get the inevitable cancer questions out of the way. You have put an extremely positive and courageous public face on your struggles, and have been very open, yet I’m sure you went through the seven stages like most people do. The anger, the questioning of why me. How have you been able to cope with such onerous developments and still maintain a positive outlook?

Way back in the early days of the Macintosh operating system, there was an error condition called “flipping pig mode”. That’s me. I’m more or less permanently in flipping pig mode. My entire life is like Kubler-Ross on fast spin these days. Whatever grace and courage I display is an accident of the life I’m living, not my portion of enlightenment on display. I’m not trying for false modesty here. It’s more the case that I’m fairly articulate and thoughtful even when I am in the grip of wall-eyed panic. As for my outlook, I’m actually profoundly pessimistic. With some fairly good reason to be so. I just don’t let that profound pessimism overwhelm my ability to live my life every day. I still enjoy my daughter, my love life, my friends and family, my writing. Heck, I even still enjoy my day job. Because what’s my alternative? Endless grief? No thank you.

Recently, a fundraising campaign took place for some treatment that is new enough to still be considered experimental. The goal and stretch goal were blown away, passed in the first 12 hours. Can you describe what you felt upon seeing all the crazy things your fellow writers did when the total passed their unlock level?

Oh, geeze, I was so overwhelmed by that outpouring of support. And deeply amazed. I really had no idea we’d go that far, all of you would go that far. I have felt so touched, so honored, so loved by so many people in and out of the field.

If you’ve written your last major work (and we all hope not), are you satisfied with your legacy in the genre?

Sadly, that may be true. I’m working on one more novel right now, but it remains to be seen whether I can really hit this one out or not. In any case, I am satisfied with my legacy. I’ve written some work I’m awfully proud of. I’ve won the Campbell, the Audie and Writers of the Future. I’ve been nominated for the Hugo, the Nebula and the World Fantasy Award. Along with Elizabeth Bear I originated the Campbell Tiara. I’ve taught or mentored hundreds of emerging writers, and been taught or mentored by scores of established writers. I am part of the conversation that is genre. I’ll never be a bestseller or a Grand Master, but I’m proud of my career.

Enough about that. Your home is Portland, an area with an exceptional population of SFF genre writers. Do you find being in this environment energizes your muse?

Muse schmuse. I write with discipline, damn it. However, that being said, everybody has to be somewhere. This is a remarkably pleasant part of the country and the world to live in, and writers are thick on the ground here. So, yes, it definitely energizes me. (Note I’ve been in all fifty states, and about forty countries on five continents. I have a lot of compare Portland to, and I do not find it wanting.)

You and I have both worked in the technology sector, you in marketing, me in engineering. It’s a very challenging industry that can be time-consuming and draining. How were you able to keep writing during the early years where success never seemed to come?

Discipline. What I only half-joking refer to as “psychotic persistence”. But mostly, I like writing. It’s fun for me. I am entertained by my own writing process, and I like seeing the stories emerge from my fingertips on the keyboard. Plus, working in high technology sales and marketing is not particularly soul-sucking, at least not for me, and uses different parts of my mind and my imagination that writing fiction does. This means I’ve always been able to jigsaw the day job and the writing career together in reasonably creative ways.

Your job has you traveling quite a bit. Do you get a lot of writing done on the move, or is it strictly marketing business on the airplane and in the hotel room?

I get some of my best writing done while traveling. No one calls or emails me on the plane. And evenings in the hotel room are a lot quieter than evenings at home. I love my life in Portland, but business travel is often like writing heaven for me.

We also share a love of photography, but it’s nothing like the photography of our youths. We don’t need enlargers, darkrooms, smelly developer and fixer, and no coating pennies with silver remnants in the darkroom. Do you think that some of the fun has been taken away by technology?

That depends on what you mean by fun, doesn’t it? For some people the dark room is the point of photography. I always found it kind of messy and mildly annoying at best. I like finding the shots, framing them, thinking about them. Everything else was just the necessary business of making it come out right. So digital photography has let me focus on the fun parts while taking away the bits that always felt like work. Perhaps more to the point, digital photography has enabled a generation (or two, by now) of children to learn to take good photos at an essentially zero recurring cost. Once you’ve paid for the camera, you’re pretty much done. So my daughter has become a fairly accomplished photographer simply because she’s had a camera to drag around since she was old enough to press the button.

Talk about your Aloha shirts. (I’ve been wearing them just as long, but I don’t get to many conventions, so nobody knows about mine.) Yours are famous for being screaming loud. What are your criteria for selecting a shirt and what is your favorite place to buy them?

I love trick fabrics, weird patterns, obnoxious colors. I like dissonance and glare and brightness. My two favorite sources are a web site called alohaland.com, and also a tailor I used to have custom make aloha shirts for me from fabrics I’d picked out myself. This is why I have a number of harlequin shirts, which is a style of aloha shirt I’ve never seen sold off the rack. Truthfully, I’m not certain why I’m so well-known for it. Lots of us wear them. It must be my distinctive style…

Your childhood family kept you moving around the globe as the son of a diplomat. What part of the world holds your fondest childhood memories, and are there any memories that still scare you today?

That’s a tough one. I didn’t enjoy the emotional experience of childhood much at all, but I really did like the life we led. I have good memories of both Taiwan and Nigeria, to be sure. I’m not sure I was ever deeply scared, though there were times when perhaps I should have been. The thing about being a kid is that the world is what it is. And without much media exposure (I grew up before satellite television and VCRs/DVDs had globalized entertainment so thoroughly), all I had to measure my life by was the life itself.

Gene Wolfe. Samuel R. Delany. Jeff VanderMeer. Robin Hobb. Lois McMaster Bujold. Half a hundred others besides, to be sure, as my reading tastes are as protean as my writing styles. But in the end, I am a total sucker for well styled prose.

I am trying to finish the first draft of my alternate history Old West fantasy, ORIGINAL DESTINY, MANIFEST SIN, before I get too sick to write. After that, if I still have brainspace to write, I will do some short fiction. But that’s about it, unless I get a reprieve on the current trends in my cancer. I’m considered incurable, but I’m not yet formally terminal (as of late April, 2013). I expect that to change in the near future. It’s been a good life, and a good career, and I am nowhere near ready to go, but that’s not really up to me anymore.