I know Patty Jansen only from Codex writers Group, although we did share a table of contents in M-Brane SF for the July 2010 issue. She is an Australian science fiction writer. 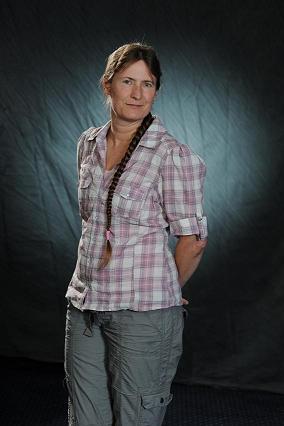 For somebody unfamiliar with the work of Patty Jansen, how would you describe your fiction and which story do you think is the best introduction to your work?

I describe myself as a writer of hard SF, space opera and daft fantasy, and this is pretty much what I write. I suppose you want a definition of daft fantasy? I apply that term to fantasy that doesn’t conform to unwritten genre rules. For example, the Icefire trilogy is epic post-apocalyptic steampunk. Make of that what you like 😉 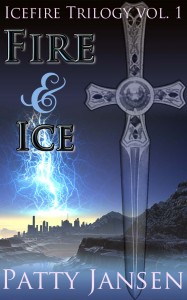 I also tend to explore societal issues that are different from those in our society, but which are seen as normal for the characters. I get a bit weary of the repetitiveness of certain character types in fiction. Grizzled detectives and chicks with guns or swords bore me. So do characters that reflect our modern thinking in fictional worlds that are based on a different time period. My first duty is to stay true to the character.

You earned a science PhD before becoming a fiction writer. In what discipline is your doctorate, and what was your thesis about?

I did a PhD in agriculture at the University of Sydney. The work I did involved pasture legumes, which are type of plant. Clover is a legume. I explain the work and the reasons behind it here

Like me, you are an independent author. What motivated you to choose this path and are you satisfied with your decision and how your career has progressed to date?

Yes, I am independent and no, I am not. While I have self-published, I also continue to submit, and occasionally sell, to regular venues (my story Survival in Shades of Orange will be appearing in Analog).

Why did I make the decision to self-publish? I’ve always enjoyed doing things myself, but I was hesitant in fiction, because you’d really wanted to avoid putting total drek out there. OK, someone may say, but publishers publish drek, too. That’s a different kind of drek. At some point in a writer’s level of skill, there comes a time when a statement about the quality of that writer’s prose becomes more about taste than about craft. I wanted to make sure I had passed that point at the very least. I made a pact with myself that I wouldn’t touch Amazon or Smashwords until I had my three SFWA-eligible sales.

The first ebooks I released were reprints. They’re easy. But then, in rather quick succession, two separate small presses wanted two of my longer projects, and, independently, both ended up falling through. I couldn’t face taking both projects back to the market, so I decided to add them to my Amazon and Smashwords collection.

My trilogy (two books out, third coming up) was written especially with self-publishing in mind. Again, I tested the waters and sent five queries, for which I got three requests for partials and two fulls. One of those fulls rejected it saying ‘I like it, but don’t love it’, and the second, I never heard from again.

By this time, the GFC was in full swing, and no one was replying to any of my queries anymore. So, knowing that the work appealed, I started writing the second volume, which, for traditional publishing, I would not have written until the first book sold. Another problem: the trilogy is a story in three parts. They are not stand-alones.

I do see self-publishing as a stepping stone to something bigger. As much fun as this is, I would not consider self-publishing the end of the road. But while I wait for a big-publisher contract, I may as well make some money.

You live in Australia. What is the science fiction and fantasy environment Down Under?

It is vibrant, a lot of fun, and dominated by horror writers. In terms of publishing, our largest local publisher of SF/F, HC Voyager, publishes a fair number of Big Fat Fantasies in traditional style. Orbit does a number of Australian horror/urban fantasy projects. There are also a number of small publishers who do a lot of horror. Did I mention I write mainly Science Fiction? That’s hardly being published in Australia at all.

Do you find it difficult or challenging to be physically remote from the majority of your genre colleagues and markets?

I really wish it were easier for me to attend the big cons. I am now at a stage where attending would probably be beneficial, but the US is such a long way away, and it’s so expensive to travel.

How much does Australia and its unique environment and wildlife impact your stories?

By far the majority of my stories take place on another world, or some of them in space. I have an urban fantasy in the back of my head that would be set in the suburbs north of Sydney Harbour, where I live, and would involve a lot of the local wildlife, but often, my settings don’t offer the opportunity for full-blown Australiana. I’ve done some short stories, though. I had a story in a local vampire anthology that involved an Australian setting, albeit an unusual one: the North Queensland rainforest.

You are a Writers of the Future winner. Tell us a little about that experience and your visit to the United States.

I went to the US in May 2011. It was an amazing experience and something the likes of which I will probably never experience again. I mean—just the look on the poor make-up girl’s face when trying to figure out what to do with my below-butt-length hair. Joking aside, the value of the workshop was enormous, and has, once again impressed upon me that I should really attend some of the US cons (damn you all, buy my stuff so I have money to do so).

I love the work of C.J. Cherryh, Kim Stanley Robinson, Stephen Baxter and Alastair Reynolds. I also love Robin Hobb and Glenda Larke. There is a very clear dichotomy here: hard SF and character-based fantasy. I’d like to think that I can write hard SF with a strong character arc. I guess time will tell if this is the case.

Oh, don’t ask me about that, because I should really, really finish the trilogy first, and I should not do anything until it’s done, and at the moment, I can pick from at least three brick walls against which to hit my head in that particular manuscript. I’ll get there, but I don’t want to be distracted by shiny new ideas.

Secretly, I’m getting excited about continuing with my multi-project development of the ISF/Allion world, of which my short stories Luminescence, His Name In Lights, The Rebelliousness of Trassi Udang and the novella Charlotte’s Army are part.

And I really need to replenish my stock of short stories.