I met Nancy Fulda through Codex Writers Group, and I’ve known her in the virtual sense since 2006. Nancy is an American expat living in Germany. 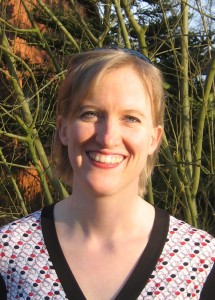 For somebody unfamiliar with the work of Nancy Fulda, how would you describe your fiction and which story do you think is the best introduction to your work?

I write character-driven science fiction and fantasy. Generally speaking, I try to find an interesting person–someone I’d be willing to spend an entire novel getting to know–and then explore the world that person lives in. These worlds are often very different from the one we inhabit. “In the Halls of the Sky-Palace”, for example, is set in a cliffside castle whose monarch has stopped aging. “Dead Men Don’t Cry” is set on a world colonized by sleeper ships (and subsequently threatened by FTL imperialism), while “Knowing Neither Kin Nor Foe” is set on a world with no humans at all.

Newcomers to my work should probably start with “Backlash”. It’s a fun, quick read set in an alternate reality very similar to our own. (But with time travel and gun fights, of course.)

How did you manage to find yourself living in Germany as an American expat?

I spent eighteen months working in former East Germany as a missionary for the Church of Jesus Christ of Latter-Day Saints. It was a highly formative experience. By the time I boarded the flight home, I’d come to love everything about Germany: the culture; the people; the pastries; everything. I didn’t expect to ever come back, so I sort of shrugged my shoulders and thought, “Well, that was nice while it lasted.”

Skip forward two years. My husband–a native German–and I ended up eating dinner together every night in BYU’s foreign language housing complex. Everything happened pretty fast after that.

How has living a significant time in more than one culture impacted your fiction?

Living in a foreign culture forces you to acknowledge other people’s internal landscapes, and to confront your own unwitting assumptions. Perhaps the most eye-opening aspect of the experience, for me, was hearing the life stories of people who’d grown up behind the Berlin Wall. During my first trip to Germany, I met a woman who’d been orphaned by war and lived by scavanging from dead bodies until she was taken in by a convent. I met a man who shot his commanding officer instead of obeying an inhumane order. I met people who lamented the Reunification because it brought instability into lives that, until then, had felt reliable and predictable. I taught English to people who’d grown up terrified of the Russians and I visited one dear lady whose husband nearly had a heart attack every time they crossed the East/West border, because she simply would not speak politely to the guards.

Very few of those details have made it into my fiction. But there’s something about listening to the cumulative accretion of human experience, story after story after story; life after life after life–that makes you realize how small your own tiny droplet of suffering is, and how precious your miniscule allotment of joy. That recognition–that we are simultaneously diffident specks and blazing beacons of beauty against the broad tapestry of existence–underlies many of my stories.

Your work has gathered quite a bit of attention over the years. You won the Jim Baen Memorial Contest, the Phobos Award, had a pair of Writers of the Future finalist stories, and have been recommended for two Nebula awards, and a few others. Which single recognition means the most to you so far?

You mean on an emotional level? None of the above. Don’t get me wrong: The recognition is great from a career perspective, and I in fact went bouncing around the house for half an hour after receiving William Ledbetter’s email about the Jim Baen Memorial Contest, but the messages that have touched me most are the personal emails from people who read “Movement”.

That’s what we’re really writing for, isn’t it? To touch a life. To take a tiny snippet of our experience, package it up with some bright-colored trappings, and pass it along to someone else. The stories we build around those core experiences are really just a way of making our inner landscape intelligible to others. So when someone is sufficiently moved by a story that he or she chooses to reach back and connect with the person who wrote it; that’s precious.

A number of years ago, you created a business called Anthology Builder, where readers can create a collection of stories of their own choosing and assemble them into a custom book. How did this idea come about, how do the results compare with your expectations, and where do you see it headed?

Um. You do realize that a comprehensive answer to that question would require a 52-page academic research report, complete with an Appendix and annotations?

AnthologyBuilder was one of those ideas that was too good to pass up. I initially threw the idea out on my blog, hoping someone else would pick up the flag and run with it. (I wanted a single-stop shopping center for the stories all my writer friends had been publishing, you see. The e-revolution hadn’t hit yet, and the international shipping prices for single issues of Analog were painful.)

After batting the idea around with a couple of online friends, I realized that it wouldn’t be so infeasible to put the project together myself.

I knew much less about starting a business from scratch back then. If I’d suspected how many false starts, printer malfunctions, and software glitches were in store, I probably would have backed away from the project–slowly, with my hands upraised. That would have been a real shame, though, because it’s been a lot of fun.

Right now, AnthologyBuilder is waiting for its next marketing push. I’m not quite sure when that will be, honestly. I’ve got a novel to write and kids to raise and cloning technology just isn’t good enough yet for there to be ten of me.

How does your computer science background influence your fiction?

Computer science is a notoriously unforgiving discipline. The CPU doesn’t care what you meant to write or how you intended your program to behave; all it cares about is which instruction to execute next. In self-defense, programmers become attentive to detail and unusually cognizant of cause and effect. This makes us socially maladroit at times, but it also provides us with excellent tools for storytelling.

I try not to let my CS background infiltrate every story, but it does show through at times. Case in point: “The Breath of Heaven” is written entirely from the point of view of an AI. (Ironically, the story was written before I joined the Machine Learning lab, not after. Good fortune, that; otherwise readers might have had to slog through my meticulous explanations of Bayesian Learning.)

Tell us a little about the forthcoming A New Kind of Sunrise.

It’s a Coming-of-Age story set in a nomadic caravan pulled by giant lizards.

Well, ‘caravan’ might give the wrong impression. Imagine a loose chain of landships pulled by reptiles twice the size of a house. (There are smaller reptiles, too, mostly laden with bags of supplies, as well as a number of pedestrian travelers.) Now imagine that the challenge lies not in getting the lizards to move forward, but in getting them to stop. And that the reason the lizards refuse to rest is that the world is slowly rotating, and the caravan is being stalked by the frigid blackness of a planetary night that lasts for three of Earth’s months.

Now imagine, in the midst of that caravan, a little girl who keeps getting in trouble for doing what’s right.

That’s the initial scenario of ‘A New Kind of Sunrise’. Before the story’s done, there will be sandstorms, bandits, a blazing landship, and one little girl all grown up and ready to defy her people.

Sorry, that’s Top Secret. I will tell you nothing about the high-tech centaurs.