Despite all the wacko nutjob politicians in Arizona who push through legislation regardless of whether the people they represent want it or not, there was a glimmer of hope in this morning’s paper.

Governor Jan Brewer vetoed a bill being pushed through by reactionary members of the Arizona GOP, showing that she is not a puppet (anymore?). Whether this is because Russell Pearce is no longer a factor, or if she felt this way all along, we’ll probably never know. But, this is a win for the people of Arizona, who really do not want firearms in public areas like libraries, swimming pools (???!!!), home owner association meetings, and state government buildings.

This sends a strong message (which will, of course, be ignored) to state politicians that the people need to be heard. According to the informal survey on the page linked above, the people of Arizona overwhelmingly support this veto. 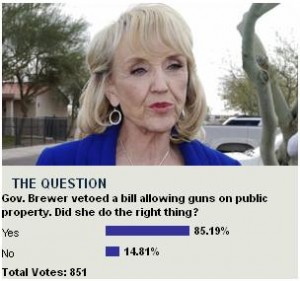 This sample shows just how out of touch the legislature is with the people of Arizona.