Today, we’re chatting with a writer who has burst onto the main stage of speculative fiction over the past few years, Mary Robinette Kowal. 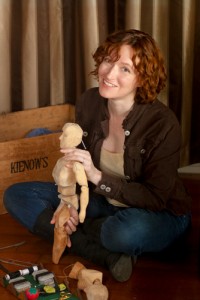 I met Mary online in the writers workshop at Orson Scott Card’s website, Hatrack River. About a year later, we met at Card’s Literary Boot Camp. She is one of the most eloquent and charming people I know, so I’m pleased she took the time to answer a few questions for us.

For somebody unfamiliar with the work of Mary Robinette Kowal, how would you describe your fiction and which story or novel do you think is the best introduction to your work?

I write all over the map in short form, so it’s a little tricky to sum up. I’ve written everything from SF horror to historical fantasy to mainstream. In long form, I focus on historical fantasy and my work is often described as like Jane Austen, with magic. For an introduction? I think the best introductions are short, so let me suggest First Flight, which is a time travel story.

You are a professional puppeteer, and were doing that long before you broke into speculative fiction. How did you end up in that line of work?

The short answer is that I was one of those kids who wanted to do everything and puppetry combined them all. When I was in college, a professional puppeteer came to see a production of Little Shop of Horrors, which I was in, and I realized that people would actually give me money to do puppets. Instant change in career plans. The long answer is in a post, here.

Which do you enjoy more, the creation of custom puppets, or performance?

Yes. I enjoy them both with a slight preference to whichever I’m not doing at the moment when the question is asked.

Your line of work has kept you on the move since we met eight years ago, spending time in Portland, New York, Iceland, and Chicago. You also travel around the US quite a bit, yet at the same time, you don’t own a car. Do you enjoy travel, and do you find it difficult living without a car today’s world?

I do enjoy travel and find it one of the best ways to understand people. By seeing all of the regional differences we have, it makes it easier to spot the commonalities, which aren’t always what you think they would be. As for living without a car? Dead simple. You just have to pick a city where it’s possible and that requires living in a place with good public transportation.

We met in 2005 at Orson Scott Card’s boot camp, sitting in a room filled with over a dozen other excellent writers. From that group, your writing career has really been the most successful to date, including a Hugo award win and several Nebula nominations. Yours is pretty much an established name today. Others entered the workshop with more experience and publishing credits (Writers of the Future win, for example), and yet your career has seen the most return on investment. Has the speed at which your career blossomed been a surprise to you, and do you occasionally experience imposter syndrome?

Yes, it’s definitely been a surprise, and yes, I still experience imposter syndrome. I felt much calmer about having imposter syndrome after talking to Nancy Kress who says that she still has it. I think that as long as there are writers that one looks up to, the feeling that they are real writers will stick around. I’m not sure that’s a bad thing, since it keeps me continually striving to improve.

In terms of networking and working a room, you are among the best I have ever met. Is this something that you have always been able to do well, or did you have to develop that skill?

Twenty years in live theater, baby. I’m fortunate that my mother was an arts administrator so I picked up a lot of these skills from her, but it’s not something I’ve always known how to do. Granted, I don’t remember the transition, but I do remember being a painfully shy child. Most of networking though, really, comes down to finding other people interesting. That part is the part that’s hard to teach.

And on top of all that, you are a voice actor, you read for audio books, and you are a podcaster with Writing Excuses. Are you dabbling in anything else, music perhaps, that hasn’t been made known yet, or are you already spread as thin as the day allows?

I cook? I mean… with the theater background, I did take six years of classical voice lessons but I’m not really a singer. I can sing, but that’s not my natural form of expression. In general though, I’m always game for learning a new skill set.

Honestly, I’m really excited by book four in the Glamourist Histories. I’m waiting on my revision notes for Valour and Vanity right now, and can’t wait to dive back into it. When I pitched it to my editor, I described it as “Jane Austen writes Ocean’s Eleven. With magic.” Lord Byron is in it and I just love him.