I met Joe Haldeman in 2012 at LepreCon. I found Joe and his wife Gay to be charming people. Joe was kind enough to agree to be interviewed. 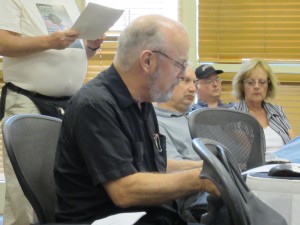 Joe Haldeman reading the names of nominees for the 2012 Hugo Awards at LepreCon in Tempe, AZ.

For somebody unfamiliar with the work of Joe Haldeman, how would you describe your fiction and which story or novel do you think is the best introduction to your work?

My fiction is usually realistic in approach but fantastic in content. Best introduction to my sf would be The Forever War or Earthbound. (Ideally the entire Marsbound trilogy, with Marsbound and Starbound.)

The Forever War is probably your best known work, and the work that really established you in the field. While you were writing this book, did you know that you had something special, or did you still have some new writer angst and question yourself about plot, structure or story?

Your time in Vietnam has clearly influenced much of your work and you’ve written quite a bit about it, so I’ll limit that aspect to the following: Do you think you would have been as successful a fiction writer had you not gone?

Probably not. My books would probably have been more cerebral – and so maybe might not have even been published.

Thinking about the way science fiction has evolved since Forever War was released, what do you see as positive and negative with the genre today?

I don’t read much science fiction, so I’m not really qualified. It seems healthy enough to me.

With all the changes that have occurred in the publishing industry over the past decade, how do you think a Joe Haldeman in his late twenties would approach a writing career in today’s environment?

I probably would have gone straight into writing novels, rather than working up through short magazine fiction – and perhaps wouldn’t have been as good a writer.

We have quite a few overlapping interests, so here are some “lightning round” short answer questions:

Telescope most likely to grab on short notice?

4″ f/7 refractor or Questar (for planets)

Favorite piece to play on guitar?

Writer most fun ever for you to hang out with at a convention?

Travel destination you most want to visit for the first time?