Jack McDevitt is an extremely personable man whom I met for the first time at LepreCon 39 in may of 2013. We chatted a number of times over the course of the convention and we got along really well. Our sense of story also seems to be similar. So, I was pleased when Jack agreed to be interviewed at Entropy Central. 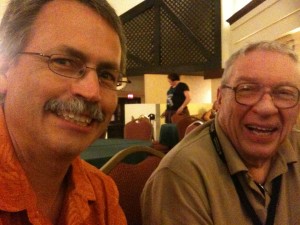 Rick Novy with Jack McDevitt at LepreCon in May 2013.

For somebody unfamliar with the work of Jack McDevitt, how would you describe your work and which one do you suggest for a reader new to your work?

Mostly, it’s about discovery. Alex Benedict is an antiquarian living in the distant future who spends much of his time solving historical mysteries. In Polaris, crew and passengers vanish out of a starship, leaving it adrift in the middle of nowhere. No one understands how they could even have gotten out of the ship because the lander is still there, the pressure suits are still onboard, and there was literally no place to go in a system that had been destroyed by a collision between stars. And by the way, there are no aliens.

Alex has appeared so far in six novels.

Priscilla Hutchins is a starship pilot, beginning her career shortly after the development of FTL technology. In The Engines of God, explorers deal with a correlation between the collapse of alien civilizations and their distance from each other. Priscilla has also appeared in six novels. A seventh one, Starhawk, is a prequel and will appear in November.

The books in both series are interrelated but function as stand-alones. I’d suggest the initial novel in each: A Talent for War, for Alex, and The Engines of God for Hutch. There are also some independent novels, like Moonfall and Eternity Road.

You spent a good portion of your life not writing, struggling with self-confidence and trying to earn a living. If my math is correct, you were 45 years old when your first story was published. What advice would you give to older adults who always wanted to write but never gave it a shot?

Try. Make a serious effort. You do not want to reach your later years and wonder whether you might have succeeded but never really tried. Just for the record, though, I wasn’t ‘trying’ to earn a living. I was working in a reasonably healthy economy, and spent most of my time doing what I enjoyed. I was in the Navy, became an English teacher, and eventually a Customs officer. I spent a substantial portion of my time with the Customs Service doing management training. I know that last one sounds boring, but in fact it was an ecstatic experience. I was also, briefly, a supermarket cashier and a Philadelphia taxi driver. If I’d never written a word, I’d probably still have felt that life had gone pretty well.

How do you think living in the workaday world for so many years before you started selling stories influenced you as a writer?

It gave me time to mature, time to watch people interact under pressure and to develop a sense of what matters. During those years I was able to read Homer and most of the Greek plays, Tolstoy, Dostoevsky, Dickens, Milton, Proust, Victor Hugo, Melville, Mark Twain, Hemingway. I discovered James Thurber and Damon Runyon. I don’t think there’s any way you can become immersed in all that and not come out of it with decent writing skills. I should add that I was also addicted to SF. Especially Bradbury and Heinlein.

After being nominated many times, you finally won the Nebula Award in 2006 for your novel Seeker. What was that experience like?

You’ve been to a number of SF conventions over the years. Which three authors do/did you enjoy hanging out with the most?

Greg Benford, Harlan Ellison, Mike Resnick. I could give you maybe thirty more….

What are your thoughts on the digital publishing revolution?

The world is changing at an accelerating pace. My father was born before the Wright Brothers flew and he lived to see us land on the Moon. I’m old school, of course. I like a book that I can hold in my hand, and turn the pages. But I suspect it’s near the end.

What is your favorite part of writing science fiction?

The ‘what if?’ part. Genetic manipulation is getting closer. So what happens when we acquire the capability to enhance, say, a child’s IQ? Maybe double it? Will parents want a child like that? Or, say we can provide parents with a child who will not age? Who will reach 23, and then stay physically in that condition? There’s a problem, of course: We’d have to control population. So the parents would have to agree that their immortal child will not be able to reproduce. Would they do it?

Or a simpler issue that entrances everyone: Are we alone? What would it really be like to sit down with an alien and talk about the universe over a Coke and pizza?

There are countless possible roads into the future. SF frees us from traveling only one.

What project are you planning to work on next?

Alex Benedict and his partner Chase Kolpath, who live on a distant world, return to Earth to try to understand why an archeologist who spent his career trying to find a cache of lost artifacts from the early years of the space age admitted defeat, retired and died, leaving one of the relics to be found by shocked relatives on a closet shelf. What really happened? Title: Coming Home.