There are several projects in the works right now that I can’t wait to wrap up and let the world see. Before I talk about those, let’s touch base on what’s been happening over the past few months. First, my novel A Darkling Nine has been sent to several agents. It’s also been kicked up to the second tier in the Baen Books slush pile. Right now, it’s a waiting game for that project. As I’ve said in the past, I’d love to have one foot in traditional publishing and the other on the indie side of the fence. The indie side isn’t going away any time soon, it’s adding the trad pub side that’s been a challenge since a small press can do little I can’t already do on my own. That’s why I’m aiming for a major genre publisher. 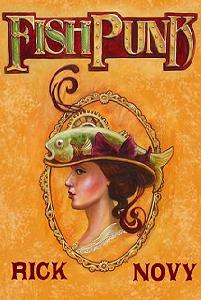 Also recently completed is a short novelette (just a couple hundred over the 7500-word lower boundary) that I sent to F&SF and, although rejected, received some good criticism from C.C. Finlay. Alas, he doesn’t want to see it again, but the repairs have been made and the story is back out in the world. I like this one for several reasons. I have a couple of really cool ideas that, although it took a long time, really amalgamated together into an emotional story mixed with some fun science. It also features as main characters a set of Filipina identical twins. It easily passes the Bechdel test.

As for what’s coming up, here’s the scoop. Last week, I recorded all 14 chapters of my novel Fishpunk, and editing of those audio files is in progress. I’ve been chatting with Scott Sigler (whose work I recommend, especially if you like audiobooks) and I’m finally jumping head-first into the audiobook world. Scott’s business model has been nothing short of a spectacular success for him. I think I’ve gleaned enough from picking his brain that I can make a similar model work. Fishpunk Audio will be coming out later this year. While reading, I discovered a few typos that will be corrected in the print and ebook versions later this year, as well.

The second project in process is a non-fiction book called Content Marketing for Technical and Manufacturing Companies. The manuscript is currently with my technical editor, Steven Groves. I’m excited about this book because it’s my first full-length non-fiction book to be going on Amazon. I wrote E-books for the 21st-Century Author a number of years ago, but that book was only published on my website, given away for free, and made available only in PDF format. It’s also quite obsolete, but still available. This new book will be available for Kindle and EPUB readers, as well as on paper. I expect it to be released later this year, as well.

The other major project underway is the long-anticipated sequel to Rigel Kentaurus. This book had been using Proxima Centauri as a working title, but that will almost certainly become Tolimon since that’s where all the action takes place. The book is probably about 25% finished, and I’ll pick it up again after Fishpunk Audio is completed.

Plenty going on here after a few years of not much happening. I don’t have a target release date for any of these projects yet, but in my mind here’s the plan: Fishpunk Audio out ASAP. There’s a technology and process learning curve here, so I don’t think any time before mid-September is realistic. Content Marketing for Technical and Manufacturing Companies I want to release by October 1st. That’s very doable because most of the remaining steps are mechanical. Tolimon, I suspect, won’t be out before January. That’s mostly due to the projects ahead of it in line.